Posted 2 years ago by Kelly Kennedy 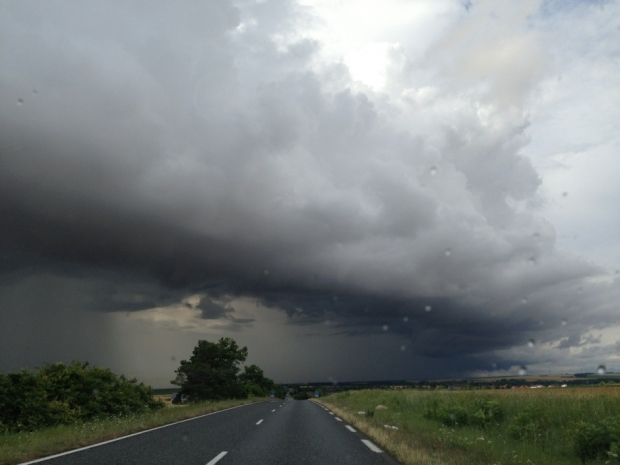 Mercredi – 7th Aout 2013
We were woken up very early this morning by a braying donkey! At least I think thats what it was?!

It was cloudy about 8am and then has rained ever since. We are all packed up and ready to go.
Heading for the outskirts of Paris!

After leaving Fleuri, after Macon we took le Peage, as it is always a straighter, quicker road but always boring as you miss out on all of the scenery and cheaper petrol :/
We made a stop off for petrol and refuelled ourselves at a nearby McDonald’s, which also fed our wifi habit! We still can’t understand why some of the campsites charge for the use of their wifi?!
We stayed on le peage until we got to junction 23 for Challon du champagne just off the Troyes ring road, as there is a lovely straight green road heading in the same direction

We drove through lots of rain today! And saw a lot of strange cloud formations because of the amount of rain in the sky. It’s never stopped!
I much prefer driving, but I was feeling tired today, as little Grace had woke me up in the night because she’d had a bad dream. Which she told me this morning was all about Nemo and his friends.

We saw lots of birds of prey on this road, Buzzards, all perched on posts watching the ground of the fields below them. They’re usually soaring in the sky above the trees but not today. We also saw two white eagle type birds of prey and a falcon shaped bird, which Wayne has no idea what that was?? Unusual for wayne, as he knows all of the names of birds, he was a bit of a bird watcher as a young lad. In my mind i have him as the young lad out of the 70s film Kes

You pass through some very strange villes and towns, some look completely deserted, eery and a little spooky. It would be interesting to see what goes on behind those closed shutters?!

We drove through Reims on a lovely street full of gorgeous houses. Very intricate fine detailing going on on the balconies and facias. Interesting shaped roofs and windows. As we got closer to Reims centre, we passed three champagne houses… One of them being Pommery! The makers of the champagne a client had bought me as a thank you gift, which we had drank here in France, in Autrans. I got a bit giddy about it!

We have settled for the night just outside of Reims Nord.
We headed straight for the indoor pool as we’d been in the van more or less all day. But we’ve travelled a long way today so we won’t have as much to do tomorrow. We are 240km away from Calais.
It’s a lot cooler tonight, that could be because its been overcast and raining all day or that we’re just further North and that’s what happens??!

2 years ago No Comments