Posted 8 years ago by Kelly Kennedy 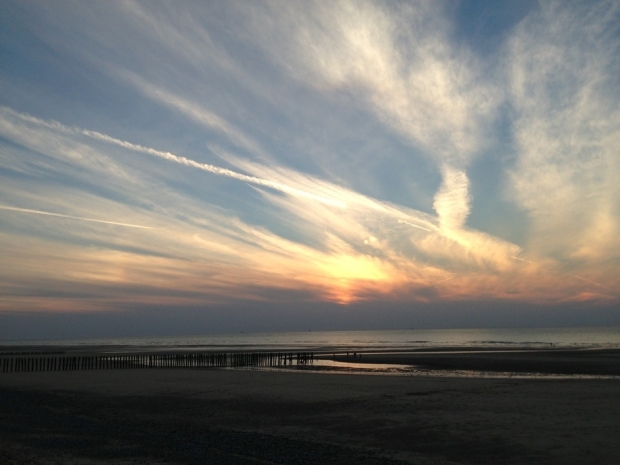 Good Morning!
Yesterday was spent at the very last campsite pool with a bite to eat and then we set off, as usual, much much later than planned.
After a lot of miles we have hit Calais. We had an unwelcome addition to our company on part of the journey, a tres grande wasp! we eventually got rid of him when we stopped to refuel. He was sticking to the windscreen with his own saliva and grande pout!

No places at any of the campsites and its too late for some of them as they’re closed?! The beach it is!
We parked up just behind the sand dunes along with lots of other campers and mobile homes, it was dusk and we were all a little hungry. Wayne took the kids over the dunes to explore while I put the tea on.
As soon as we were finished it was bedtime. All completely worn out.

Friday 9th August 2013
We woke very early to an overcast and cold French morning. We stopped off for fresh pain au cereale et croissants and made it to Tunnel sur le Manche earlier and we crossed half an hour earlier.
We are now sitting in Folkstone services, freshly showered and kids and Wayne have had a bacon butty and fresh orange. While I frantically type away with a nice cuppa tea!
We are going to stop off at the Simpsons and then call in to the Farrers before heading home to see the lovely Mr Tinks!
Happy days

8 years ago No Comments